In the fall of 2016, with my 4-year-old daughter, I first set foot on Canada to study a Master’s degree at the University of Ottawa.

The first valuable lesson in a foreign country

I studied full-time, and my daughter was just old enough to go to kindergarten for free. Unfortunately, my child’s school started at 8 a.m and ended at 3 p.m. At first, due to my inexperience, I rented a house far from the University (this was because the house rental price there was cheaper than that in the center), so including the time to catch the bus, my day only revolved around taking my daughter to her school, catching the bus to my school and then… coming back to pick up my daughter. Yet, I was still one of the first graduates of the class, I was able to work full-time during the summer when there were no classes and continue to work part-time in the fall and winter after that. Actually, a secret I had.

First, I checked the courses to see if there were any subjects that would finish after 2 p.m. The bus here was often missed, so I had to have 30 minutes to spare in order to pick up my child in time. The first semester I had 4 classes.

Because of my foresight nature, since I signed up for classes in Vietnam, I had deliberately chosen the ones from 11:30 a.m. to 2 p.m. Thus, I had more time to go to the library to review my lessons, had about 2 and a half hours of formal study, and I would be just in time to pick up my child. However, there was one subject where the morning class was full, so I had to register for the afternoon one to reserve a spot. The day the first lesson of that subject began, even though my name was not on the morning class list, I still sat in the class and presented to the professor that I was a mother who was raising my child while going to school. Right after that, she immediately invited me to the faculty office and asked the people there to help me get into her class by all means.

That was my first lesson in a foreign land: No need to beat around the bush. I found the people here were very flexible. The law existed, but depending on the case, they would flexibly create the best conditions for themselves. So my first problem had been solved!

In the first few weeks, despite detailed calculations and running faster than a running man, I could not pick up my daughter on time because there were 101 reasons that I didn’t anticipate. Sometimes it was because my professor finished the class a few minutes late, which made me late for the bus; sometimes the bus was missed. My time was so limited that if I got stuck to a chain of red lights, my daughter would certainly go to the school office to wait for me there. So I decided to move to another place to live, even though it meant I lost my $850 deposit. To tell the truth, many nights after that, I still couldn’t sleep on thinking of that sum of money. Anyway, later I was always proud of how decisive I was. If I didn’t do that, I would still be diligently catching the bus right now and praying to God not to get a red light, and not even graduating because I didn’t have time to study.

How to study effectively and still be a close mother to my child?

I have always thought that the most precious gift parents can give their children is time to play and talk with them. What’s more, my daughter had just moved to a new country, like me she was extremely confused and scared. So whenever my daughter was awake, I played with her. On days when there were too many lessons, I gave her a chair next to me, took a paper for her, and invited her to study with me. The advantage was that my daughter came home early from school, so we went to the market to cook dinner, sang songs, called her dad and grandparents, then we took a bath, went to bed when it’s only 6 p.m. On days I was fine, I stayed up late to study. In case I was too tired, I would sleep with my daughter, then wake up early to learn the next morning.

Master’s lessons were endless. My major requires reading a lot of materials, therefore 4-5 hours a day for studying was not enough. There were a few people in my class who were alone without having to worry about their children, but finally they had to give up because they couldn’t stand the intensity and pressure. I was also very confused. But fortunately, I did have many good people to help me. One was a fellow countryman who was very good at social studies. He was always ready to teach me how to read quickly. For example, he told me to go online to read reviews first to get the main idea, then skim to find the information I needed, then read that part carefully. The others were two girls that I happened to know through a Facebook group of Vietnamese students in Ottawa. They were willing to walk a few kilometers to my home to take care of my daughter for me so that I could went to school to take the exam.

This was because the exam schedule was decided by the faculty and it was not the same as the class schedule. Once, my 4-and-a-half-year-old daughter saw I was busy calling to ask a babysitter in the afternoon so that I could went to school to take an exam, she immediately suggested that I let her sit in the closet and promised  she would stay in there quietly. “The police won’t arrest you.”, she said. (In Canada, the law does not allow children to be alone at home. My daughter knew this because once she overheard the telephone conversation between me and my husband about it.)

At that time, I felt both funny and loving my daughter, and I wondered if  I was too selfish when diligently pursuing my education and career path so that my daughter would be somewhat disadvantaged. But later I once took my daughter to the park to play and met my professor who was also taking her child there to play. The teacher told my daughter that she had a wonderful mother who constantly strived to study and she should be proud of that. At that time my daughter was about 5 years old and she was still shy, so she only replied softly, but I saw in her eyes a glint of pride and admiration. I knew that I had sown in my child a love of learning and schooling in a natural and profound way, and also showed her an example of constant effort.

That summer, the professor recommended me a full-time research job at City Hall. My daughter  went to summer camp from morning to 5 p.m. So the summer of 2017 was the most beautiful and relaxing time of my life in Canada. I also combined the project I participated in at City Hall as a thesis topic, which meant that I could get the best of both worlds. In the next fall and winter, when all of my classmates were busy writing their thesis, I had almost enough data and information, I just needed to rearrange a bit and submitted it. I leisurely took a few more courses to earn enough credits, wrote my thesis, played with my daughter, and still had time to do yoga, continued my part-time collaboration with City Hall and built my relationship network, which was the premise to help me get a good job right after graduation.

That was how almost 2 years of my Master’s studies with my little daughter had passed. I always thanked my daughter for always being with me. She gave me a little hard time, but in return I learned many things. There was a time I worried that I would be like some of my friends who had to give up due to too much pressure. Fortunately, thanks to the afternoons when I and my daughter wandered, I felt relaxed and was able to go on my Master’s studies. I didn’t know if my 2 years of schooling in Canada would had been so memorable if there weren’t the times when the professor changed the class schedule, when my daughter sat with me in my class and casually snored, or when in our group study sessions there was always a little girl sitting and drawing pictures while her mother and classmates were discussing… world war and peace.

As you may see, nothing is impossible. As long as we are really determined, know what should be prioritized  and make a specific plan, I am sure there is no mountain or river that we cannot overcome. Of course, if there is someone who goes ahead to advise, encourage, and connect us, that path will be much less thorny. Therefore, if you are stuck, uncertain, confused, you want to share, or you simply want to develop yourself further, come to eMentorHub where you will find a second home to share and grow up together.

“When you fail, go home

When you are so tired, go home

When you are confused, go home

When you feel uncertain, go home 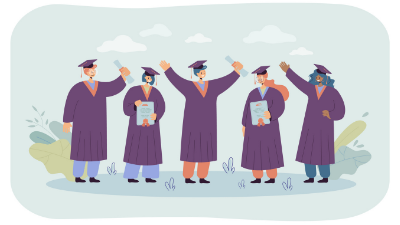